Salta is a nice enough town but after 5 days we were definitely ready to leave and find out what Bolivia had in store for us.

With the rear shock fixed, the bike felt much more commanding, and there were no problems refuelling or using or the side stand.

The road out of Salta was as twisty as anything found in the Alps and as we climbed the mountains became almost tropical. Green, leafy, and humid. Along the way we came across some kind of ruins or other site. Whatever it was we couldn’t quite make out, but we went to investigate anyway. Soon enough though the air became drier and the leafy green trees gave way to thorny cactus, and before we knew it we were in the desert proper. Wanting to give ourselves plenty of time to cross the border we opted to spend the night in the small town of Humahuaca. Strange name, and strange town compared to others we’d been to so far. It seemed more colourful, more culture rich, more Bolivian than anything we’d experienced so far in Argentina. And surprisingly enough, it had a decent hostel/hotel too. The next morning we woke earlier and headed for the border town of La Quiaca. Crossing the border was a slow but simple affair. In Morroco the whole process took around 20 minutes, but we were now on South American time, and about an hour or so after we arrived we’d exported ourselves and the bike out of Argentina, and in to Bolivia.

Note: Don’t loose the little green card you get when you cross into Bolivia. This is needed when you exit. Well, that or a fistful of dollars and an ear bashing.

Villazon is the first town we entered once across the border. Again it was more colourful and lively than anything we’d experienced in Argentina, and unlike Argentina, the Supercard worked in the very first ATM I tried. Result.

The further we pushed into Bolivia (towards Tupiza) the more dramatic the landscape became. We spent a couple of days in Tupiza before heading for Uyuni. Perhaps we should have stayed longer. Compared to Uyuni, Tupizia is a Paris.

I had wondered why Google Maps had shown a much longer route from Tupiza to Uyuni, than the direct one I’d set up in Basecamp.

A few miles into a 133 mile route I found out why. The direct route was pure off road. All 133 miles of it. Fine on the face of it, but it was such bad washboard that progress was slow. Super slow. In fact I’d ridden easier pistes in Morocco. Without the corrugation it would have been a good off road, but in the state it we found it in it was as evil as it was beautiful. It took us nearly all day to do just 70 miles. We stopped for lunch in a tiny village/town, and considered spending the night, but the only ‘hotel’ with running water was full.

Instead we stocked up on water and decided find a camping spot high up on the altiplano. The next morning we set about completing the journey to Uyuni. If anything the road got worse. Where it wasn’t badly corrugated, it was deep sand, and just when it looked like I could up the pace, yet more corrugation. The pillion had enough and decided to walk the worst of it. 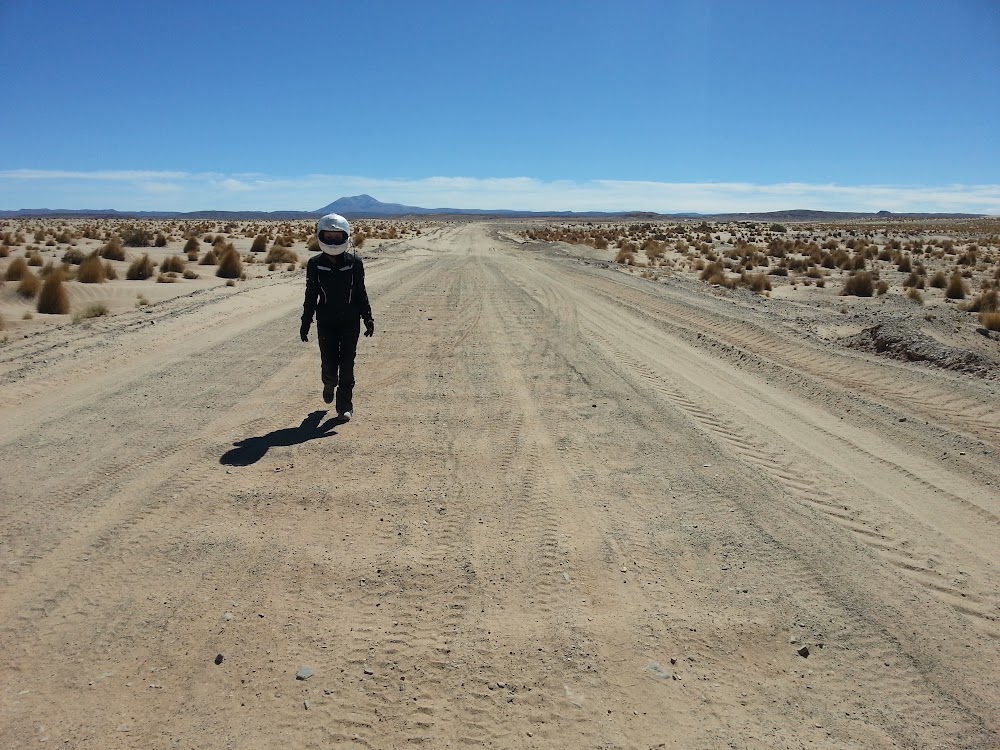 Three hours later we arrived in Uyuni. First impressions were not good, but then we were only there to start the next ‘special’ stage of the trip. The Salar de Uyuni.