Bought unseen, how will this KTM 950 adventure stack up on (off) the road

It seems I can’t be without a bike for long. Even before I was back from South American tour, I was scouring the web for my ultimate adventure bike from the comfort of my hotel room in Buenos Aires.

2016 had been an interesting year in the adventure bike world. The Honda African Twin was now on dealers floors, the Husqvarna 701 had been resleased. KTM’s new 75bhp single cylinder engine had been let loose (albeit in a Duke 690), and both AJP and SWM have bikes based on the old Husqvarna TE630 engine.

My criteria was simple. Any new bike I bought must have the following:

Unfortunately there isn’t a single bike on the market that meets these criteria. The closest is the KTM 690, but is slightly lacking in power and smoothness for the thousands of miles of tarmac that I’d inevitably encounter whatever my next adventure. Prices are high, and it’s due a new engine in 2017, it just didn’t make sense.

Four days after my return to the UK, I decided that I’d wait out the market. Perhaps KTM’s parallel twin, or Yamaha’s MT-07 Tenere, both rumoured to be in development would meet my needs, but until then, I settled on a KTM 950 Adventure. The bike looked like it had been stored in a damp shed. Almost every one of the bolts was corroded, the brake discs were rusty as was the chain. To top it off, the paint on the tanks was bubbling badly (a semi-common issue with the 950), and the exhaust collector was holed in three places. Still, the engine was solid, and it was a good base to work with. In the UK owners don’t seem to bother doing preventative maintenance or mod their bikes much. Most of the 950/990s I saw still used the OEM sump guard, original clutch slave, lacked the side stand relocation, and were generally untouched.

This bike came with OEM racks and panniers, a touring screen, and some old Oxford heated grips. They were the first thing to be cut off and thrown away, not just because of my preference for Symtec heated grips, but because they way past their best and seemed unlikely to work correctly.

First things first. I’d read about the water pump problem on 950, it supposedly suffers from premature shaft wear and should be checked at 15,000km. With 9,000 miles already on this (new) engine, I decided not to mess around and took the bike into my local dealer for a replacement pump, service, and valve check. And with that I could begin my work.

I set to work. Having read through some of the mammoth 950 adventure threads on Advrider I had a good idea of what I mods I’d make but before that I’d have to clean up and take care of maintenance.

First was a new chain and sprocket kit. I went one size up on the front sprocket, but kept the old one as a spare. 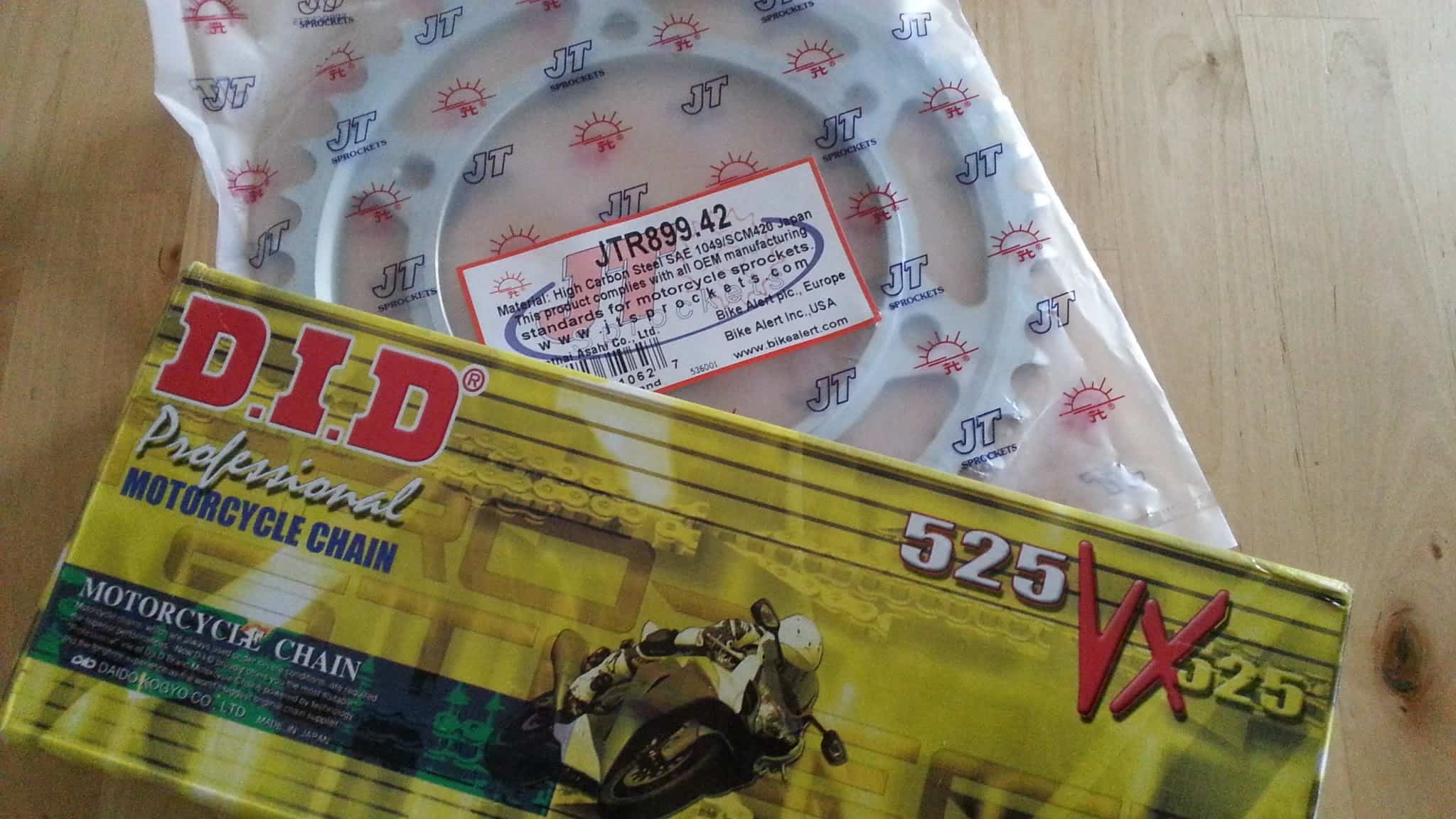 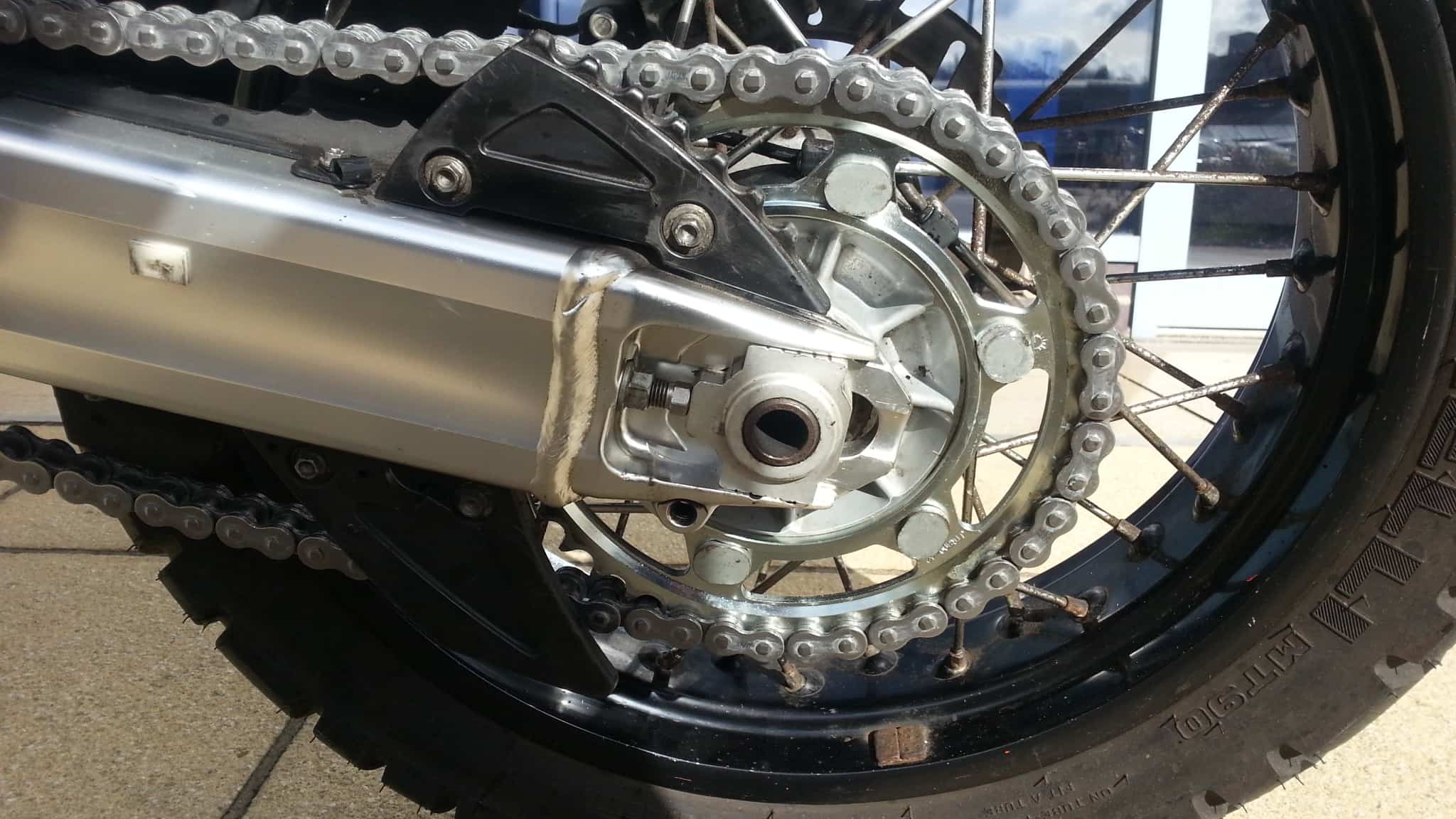 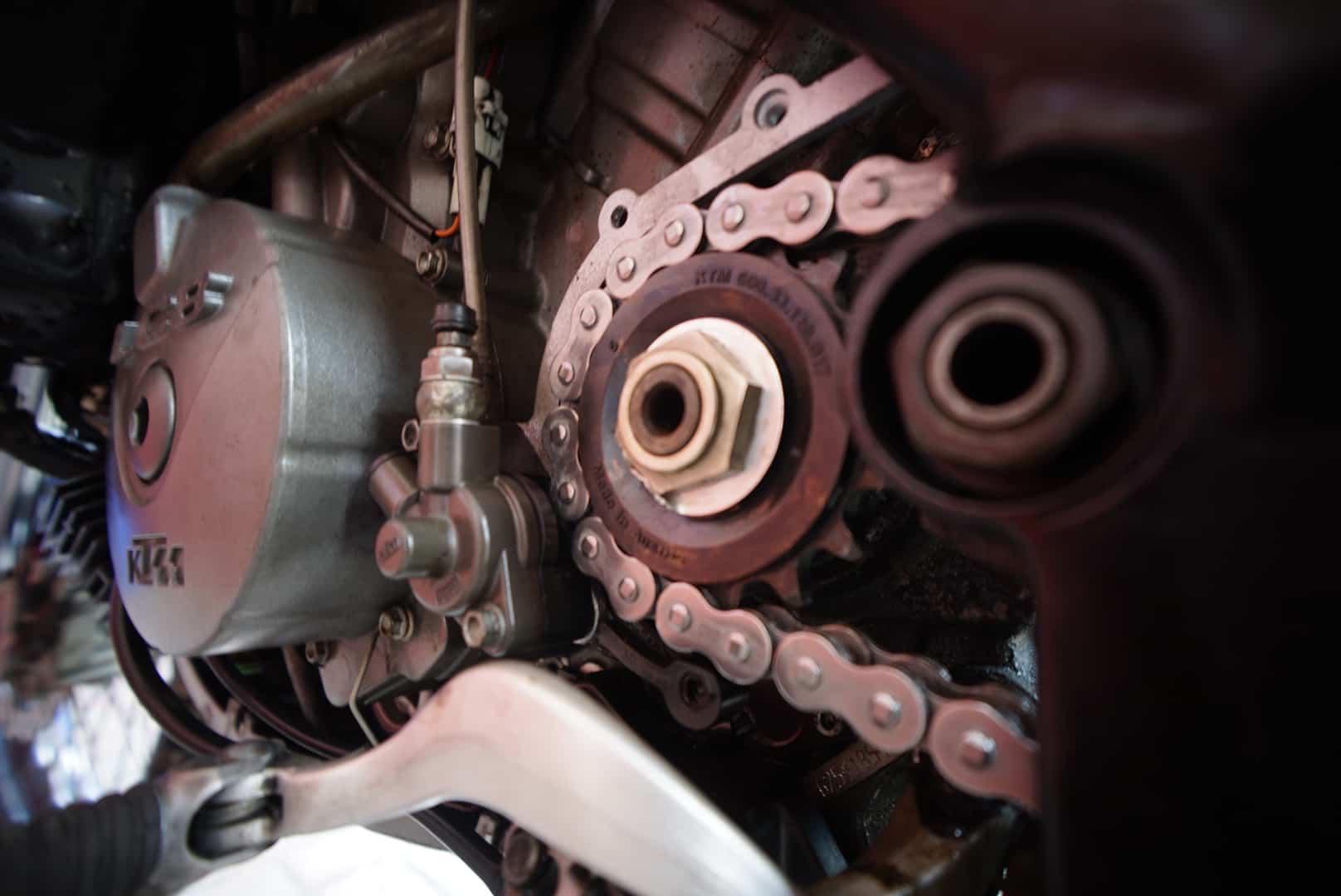 Next was the brakes. I font the braking performance to be woefully inadequate. The 950 Adventure is a big heavy bike. Over 230kg possible more, so you really want brakes that can be relied upon. The current rotors/discs looked good to I lightly abraded them, cleaned the callipers, and installed new pads and fluid. Much better. With the engine given a clean bill of health, it would daft not to let it breath properly. I had seen plenty of aftermarket airbox/filter options, for moment I decided to stick with the OEM design, until I was more comfortable with the bike. The side stand on the 950/990 series bolts to the engine casing. This is a particular poor design that has led to more than one cracked case. Whilst such a catastrophic incident would be unlikely prevention is always better than the cure.

The prevention in this case was in the form of the CJ designs side stand relocator bracket. This completely removes the side stand from the engine, and sees bolt to the frame with a nice thick steel bracket. It adds some weight but also security.

Unfortunately it wasn’t a straight bolt on job with the 950. The early bikes had a slightly different frame, and was forced to grind away an extrusion in order to get the relocator bracket to sit flush. Once installed though I’d never have to touch it or think about it again.

Then came the modifications. With the old heated grips removed I installed Symtec heated under pads. I’d used these on my xCountry and was happy with their performance. Being pads only, it meant the choice of grip to go over them was left up to me. I chose a semi waffle design for that dirt bike feel. My bike came with the original exhaust cans (crazily heavy) and a set of light straight through cans. No matter what I used the bike was obnoxiously loud. Stripping it down I found that part of the link pipe was rust mess. A bit poking around and I found multiple holes and corroded parts. Rather than get a direct replacement I took the opportunity to save some weight and go for a 2-1 setup. There are a lot of 2-1 link pipes on the market but I thought it important to go with one that doesn’t reduce the overall volume the pipe can carry. I ended up with a GPR Titanium end can and 2-1 linkage. Unfortunately I wasn’t impressed with the welds. Sticking my fingers into the link pipe (yes I have a habit of sticking my fingers in places they don’t belong), I found that welds were sharp and rough and with fragments sticking out. I promptly sent the whole unit back to be replaced. The new one was much better. Not only is the 2-in-1 system lighter, it looks much better too. So good in fact that I was temped to leave the rear plastics off. More weight saved. The sound was improved over the stock system without being too loud. Although I’d only just got back from a long adventure, I also had my next trip planned. A KTM meetup in Wales, culminating in a sprint race, and few weeks touring Ireland.

My 950 came with a touring screen. I was not impressed. I didn’t like the look, but more importantly couldn’t stand the buffeting either. A painstakingly long search turned up the Rade Garage carbon fibre rally screen. This certainly looked the part but would it cure my buffeting? Unfortunately the answer was no. I changed to a Schubert E1 helmet and saw some improvement especially after removing the peak, but at 5’10” or 178cm, the screen didn’t work for me. I was neither in clean air, nor protected behind the screen. Desperate so salvage the situation I turned to a clip on (screw in) spoiler. This helped immensely. It wasn’t perfect, but was perfectly adequate.

Playing about off road meant sooner or later I was going to drop the bike or have some kind of accident. There were crash bars attached when I bought the bike, which I instantly removed. In my opinion the tanks do a good job of protecting themselves and the bike as a whole. What did need addressing was the sun guard. The OEM guard whilst functional was ugly, and prone to shattering on impact.

In its place I added a G-IT guard. I’d come across these on the KTM 690s, it looked a well made pice from 4mm steel, and as a bonus contained a tool storage compartment. The black 950 Adventures arguably look the best, but that beauty comes at a price. The black paint on the tanks is prone to bubbling and mine were no exception. I couldn’t live with the look, and took them to my local powder coater Jason at JPM Norwich. He took his sweet time doing the job and in the end I needed the tanks back for the rally in Wales. He’d completed the job but it was poor.

The paint was very uneven and not properly coated. It was tacky. As soon as I got the bike dirty the dirt stuck into the pain and was impossible to move. After my trip I took the tanks back to him and he promised to correct the issue. That was the last I ever saw of those tanks. Call after call went unanswered. I went to his work (owned by his father) no one had heard from him. I even got the police give him a call which he ignored along with their message.

During that time I’d been riding around with a mini 3l tank I’d attached above the airbox. Given how thirsty the LC8 motor is, you can imagine the kind of range I was getting. One upside of the tiny tank was how light and narrow the bike felt. It was definitely fun to ride around, but obviously impractical too. After a couple of months with no tanks I bit the bullet and ordered a new (used set) online. These were complete with fuel caps but the key had been lost. I wonder if these were a another set that Jason promised to paint and then stole.

In the end I got the bike up and running with the new tanks and new caps.

Why someone would want to steel a 15 year old bike is beyond me, especially in the UK where they aren’t exactly inconspicuous.

The bike was parked in my driveway. I’d gone out with friends for drinks returning home around 3am. I immediately noticed something was wrong, as I didn’t remember putting the bike away, but I opened the poor mans garage (read storage cupboard) anyway just to check. Nope, no bike. Then maybe 300m down the street I heard the distinctive sound of an LC8 v-twin engine. It was my bike.

I ran down the road, but it was gone by the time I got anywhere near. I cut across the car park of the office I worked at. The security guard was outside. I asked him if he’d seen anything. He said oddly he came out of his office as he heard someone on a bike giving it full beans. Being a biker himself he was curious so came out to look and say an ‘adventure style’ bike hooning it down the road. I asked about the security cameras, but unfortunately none pointed in the direction of my street.

I put in a call to the police and an insurance claim. The bike was never found, and I had a payout of around £4,500.