This is the second year I’ve been to Bluesfest. The festival went well, my team got beat mostly my premiership sides and I ended up with a few bruises, but at least I got a chance to test out my new camping gear.

First impressions of the tent (an OhVee tribe 2-man tunnel tent £38) were not good. One of the poles of the tent frayed on the first day and the zip broke on the front door. All that was on the Friday when setting up. Despite the drama, I managed to pitch in good time, and get all my gear sorted out, before having to go and pick up the girlfriend  who was arriving with all her touring gear, at Liverpool Street.

After that came the drinking, and two days of lacrosse.

Some pics of me in action The three days camping was a great introduction into what life was going to be like on the road, and I was looking forward to the adventure.

On the third day of the tournament my team was eliminated at about 4pm, which gave us plenty of time to shower, and pack up before making the trip from Surrey to Folkstone for the Channel Tunnel.

Packing all the gear and loading the bike with pillion and all her luggage took about an hour and half. I clearly needed more practice.

It was a nice warm Sunday afternoon and the road to Folkstone was reasonably clear. The journey took little over an hour, though I might as well have taken my time as the 19:20 train was cancelled and I had to wait until 20:55 for the next one.

Waiting for the next train: 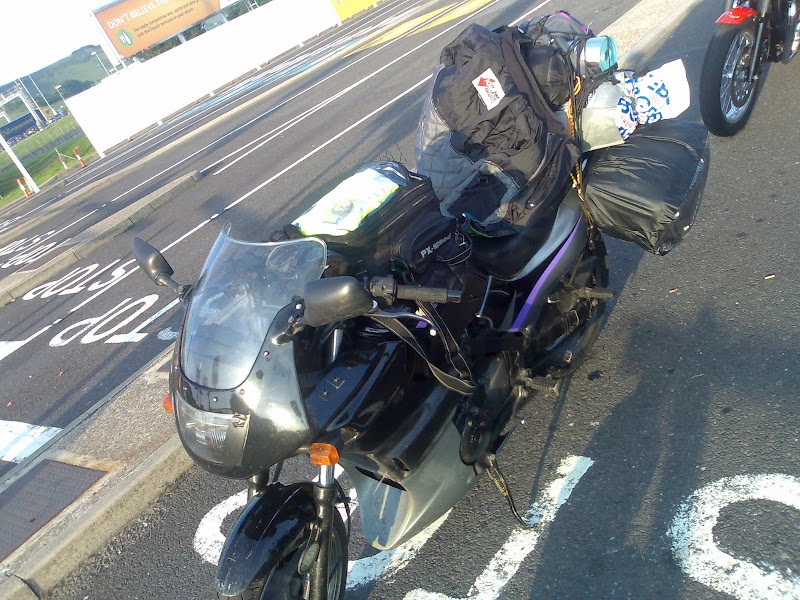