The next stage of our journey would see us leave Chile and head back into Argentina to Mendoza. At well over 1,000 miles long, we decided to tackle this stage over the course of a week.

First up was Paso de Jama, and the border crossing into Argentina. From San Pedro de Atacama we climbed to over 4,000 meters, coming within 7km of Bolivia, and the Languna route we’d abandoned previously.

Despite it’s twisty, mountainous nature, Paso de Jama wasn’t particularly interesting. The highlights were a minor salt lake, and some pink flamingos that we struggled to catch on camera. The border crossing was quick and efficient. There’s a series of steps to go through but each kiosk is marked with a number. Once you’ve done all four you’re free to go.

With Chile and Argentina sharing the same building for customs and immigration, I was left wondering where the officers on the Chilean side live, and how they get home.

The immigration office is well inside Argentina, and while Suscres is the closest town in Argentina, there is nothing on the Chilean side for almost 100 miles.

Our stop that night was a roadside motel. It was overpriced, but decent enough, which was just as well, since there was nothing around for miles.

After changing some dollars at a pitiful 12-1 exchange rate, it was time to hit the gravel. We were told that the road leading to San Antonio was fairly smooth, but the 70 miles or so we took were as badly corrugated as anything we’d come across bar maybe Chile. It seems like every non-sealed road in South America is badly corrugated. It’s akin to riding over railway sleepers, and totally ruins the experience. It doesn’t seem to happen to Europe’s non-sealed roads, or even Morocco.

After lunch in San Antonia we turned onto the famous Ruta 40. It was dusty dirty, and again badly corrugated, at least for the first 20-30 miles. Then we started to climb, and climb, and climb, until we reached Abray del Acay at 4895m marking the highest altitude (that we’d noticed) of the trip so far. It was all down hill from here, literally. 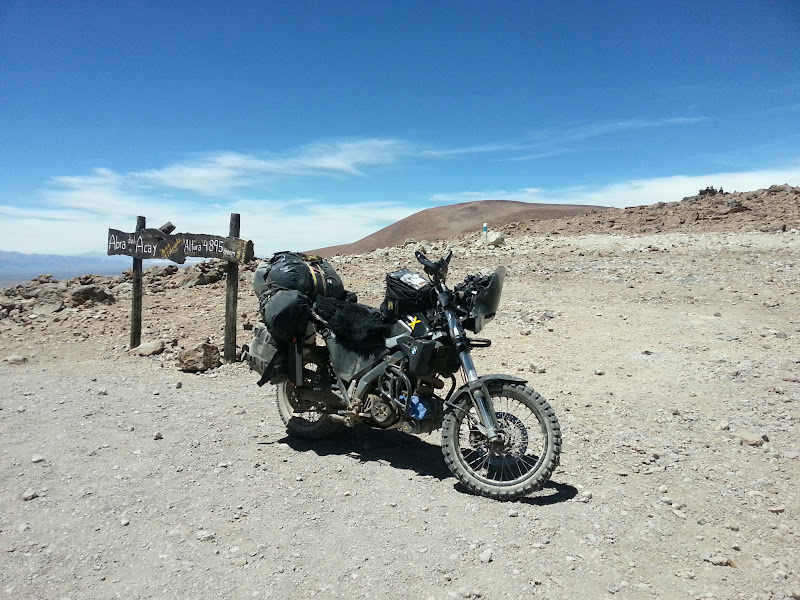 The gavel improved, as road wound down the side of the mountain and through the Argentinian countryside. At one point it opened up a little and we found ourselves approaching the crest of a hill a little too quickly, only to find that on the side was a deep rain/overflow gully.

The shock bottomed out on returning to the earth and the bike landed hard. So hard that it tore one of the pannier straps clean off. After some emergency repairs utilising a few of the extra nylon webbing straps I brought along, we were good to go. Arriving in Cachi later that afternoon, we made our way to the municipal campsite. This would be the first time on the trip that we’d camp at an actual campsite as oppose to out in the bush.

Much to our surprise, the campsite was well looked after, with plush green pitches, hot showers, and clean toilets.

From Cachi to Catastrophe

Back on Ruta 40 the next morning and the irksome corrugations, I noticed that the bike had developed a strange handling characteristic. I pulled over to inspect, and found this: 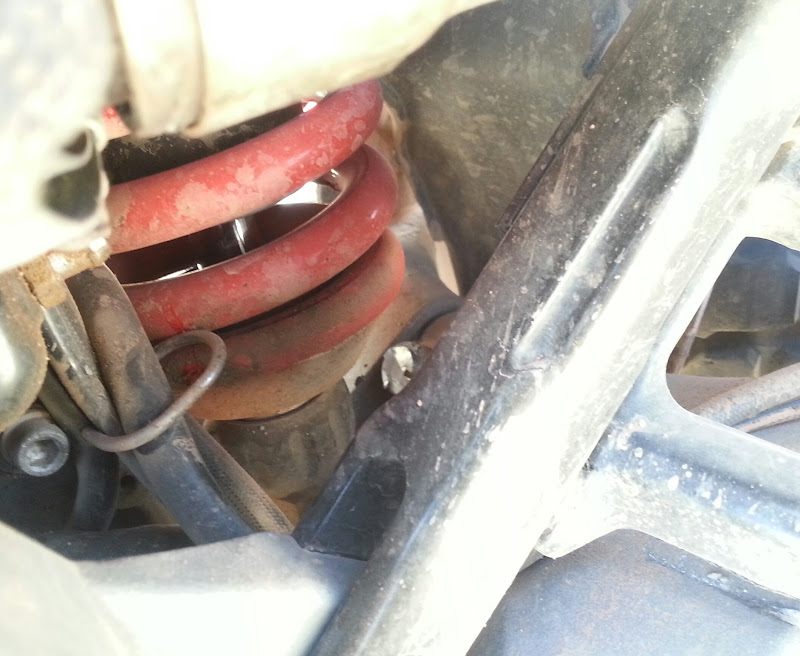 The heim/rose joint had completed snapped in two. This wasn’t the original joint, but a YSS replacement courtesy of Firefox Racing, who’d already stuffed up shock in the first place.

At nearly 20 miles out of Cachi in 30c heat we weren’t about to walk anywhere. Our only option was to wait patiently at the side of the road, and flag down someone with a truck. The plan was to either get them to take us back to Cachi, or better still pay someone to take us to Cafayate, which was our original destination.

We didn’t have to wait long. No more than half an hour after the breakage a Toyota Hilux came rolling by. Once I flagged them down, I noticed something familiar about the driver and his passenger.

It turned out to be a French couple we’d previously seen, but not met at the campsite in Cachi. They were sympathetic to our plight and immediately set about clearing the back of the pickup to put the bike in. They even left some of their things behind to make room. 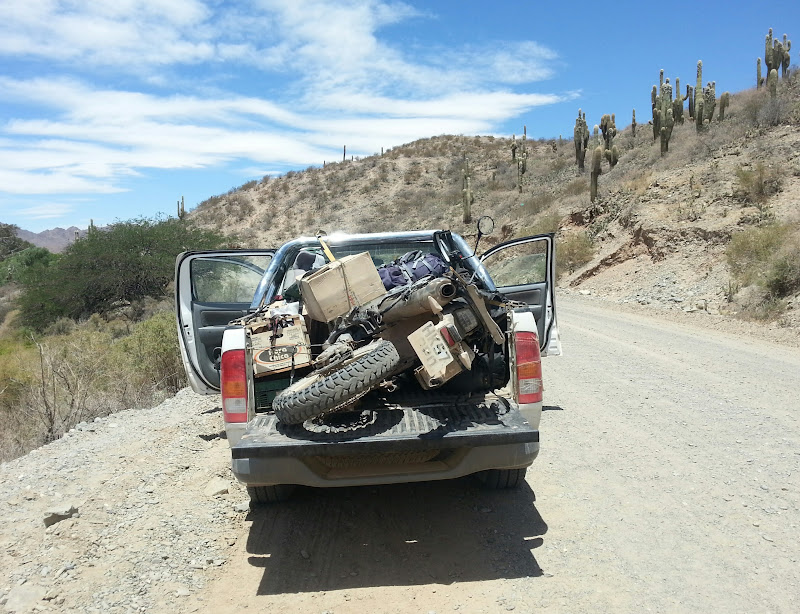 With the Hilux loaded we set off for Cafayate, along what would have otherwise been a fabulously scenic road with weird and wonderful rock formations.

The couple were kind enough to drop us off at our hostel for night, and refused to take any money for gas when I offered. Instead Sam and I took them out in the evening to sample some of the fabulous local wines. 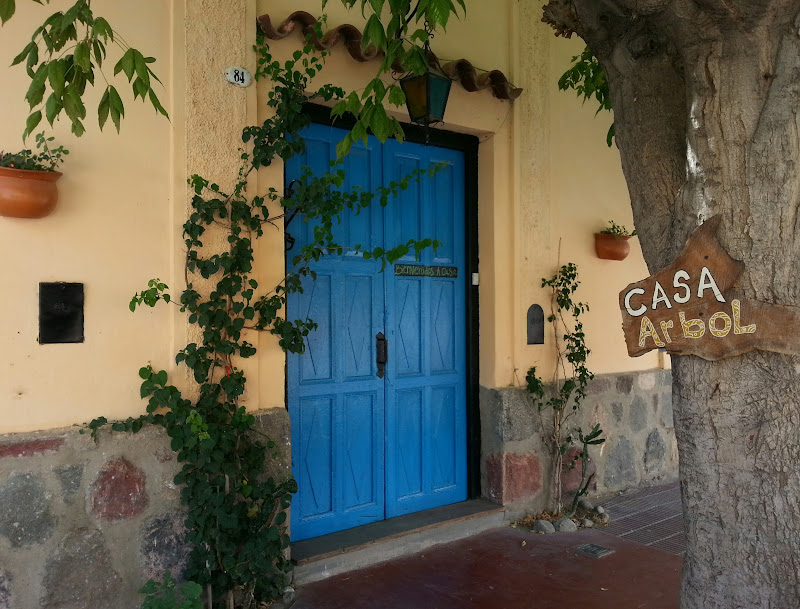 It was impossible to get the shock fixed in Cachi, so we hopped on a bus to make the four hour journey to Salta, leaving the bike and most of our belongings back at the hostel.

At least in Salta I knew a mechanic who might be able to do something. Of course when I first dropped off the shock he wasn’t so sure. The rose joint unit was aluminium and whilst steel welders are a dime a dozen, it’s much harder to find someone who can weld aluminium in that part of the country.

I left the shock with him, and returned the next day, and the next, and the next. Every day he’d say manana, manana. A bit like the last first time I visited. However this time it wasn’t his fault. He’d taken it to a welder, but with it being a weekend and two public holidays the welder wasn’t working.

After a week in Salta I finally got it back, about an hour before the bus for Cafayate was due to leave. The quality of the weld didn’t inspire confidence, but it was the only fix around. Back in Cafayate I installed the shock noting that it was now slightly shorter than before, losing us about 10mm of ride height. After a brief shake down I was as satisfied as I was ever going to be with it, and set about packing up and hitting the road.

Mendoza was over 600 miles away, and I wasn’t sure how well the repair would cope with the bike fully loaded, or how long it might last. We broke the journey up into shorter segments and explored the countryside in between towns on the way.