When adventures turns in to survival

If part of the fun of travelling is when things don’t quite go to plan then this stage of the trip will be looked back upon with rapturous laughter.

Our planned route had us riding across Chile from Iquique to Ollague, to start another ‘special stage’. In this case, Bolivia’s Laguna route.

We set out on the 180 mile trip shortly after breakfast. As usually I’d filled my hydration pack, and we’d picked up some food both to eat on the road, and when camping. There’s little in the way of infrastructure between Iquique and Ollague, and nothing at all on the Laguna route.

Pozzo Almonte is the only town on the road to Ollague with any fuel, and even though it was only 30 miles from Iquique, where we’d already refuel, we stopped to brim the tank, 2 Primus fuel bottles, as well as put 3 litres in a can I’d picked up for $2.500 from a  china store.

The road was long and isolated, the only other vehicles being HGVs, and commercial pick-up trucks. Progress then was swift, and in a few hours we’d covered 140 miles. Then the tarmac ran out. 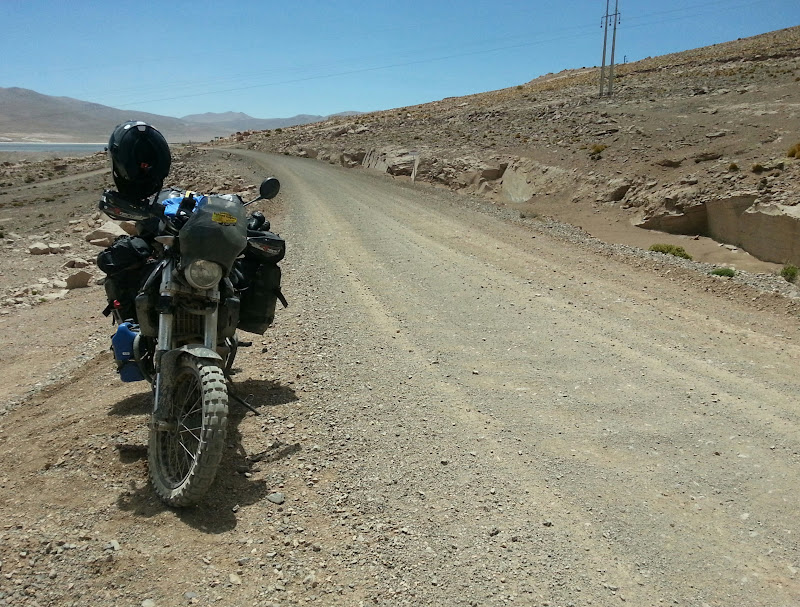 As we turned off onto the dirt road we were great with deep high frequency correlations and left with the choice of ride very slowly, or go as fast as we could without shaking the bike (and ourselves) to pieces. It was a horrible bumpy ride, but we continued on bouncing around for 20 miles.

As if the corrugation wasn’t enough, the first 25 miles were also littered with patched of soft sand just wanting to catch out the unsuspecting travellers. I hit a patch at speed and struggled to contain the wobble.

The road narrowed as reached a small incline, then widened at a left-hand downhill turn. The corner was all deep soft sand that send the bike tipping to left. I corrected but that only took us into a built up patch of sand on the left. The front wheel slid from under us and down we went. Our first crash.

Fortunately we weren’t injured, and the only damage to the bike was a broken left wing mirror. We picked ourselves and the bike up and continued on. Bizarrely the GPS had now added 6 miles onto the 23 miles left our destination. Perhaps we should have questioned it more thoroughly, but we could see the route ahead of us and so pushed on. 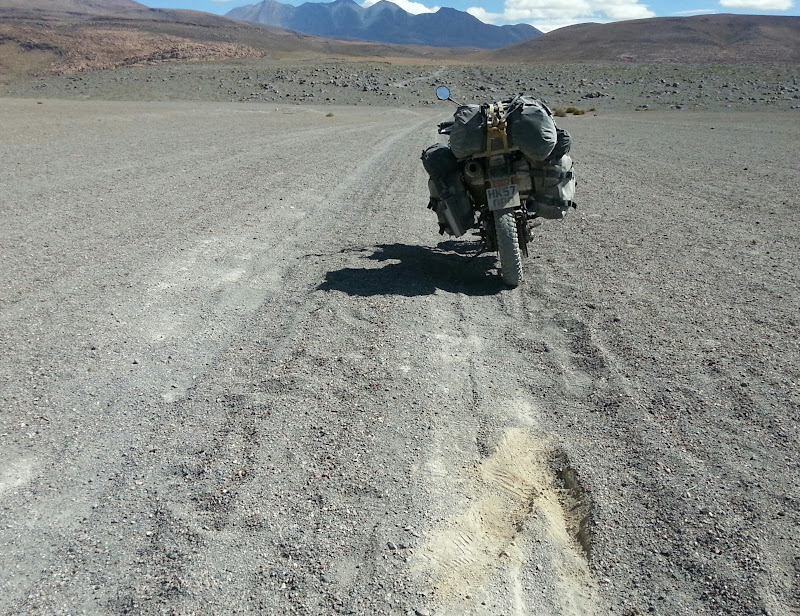 And on, and on, until the track disappeared altogether for a mile or so as we bounced over rocky terrain. The track returned shortly afterwards but was now soft sand, and further down the road we crashed again. This time getting the bike stuck, and breaking the tip off the brake lever.

We built a road of rocks to get the bike out, and Sam decided to walk some of the more sandy parts. No sooner had I set off, and down I went again, this time with my ankle stuck under the bike, and my ass on some plant that must have been a relative of the cactus family. Ouch! Once up and dusted off, we set about freeing the bike. Again another road had to be built. Enough was enough. We were only twenty something miles from our destination, but could have been 2000. It didn’t matter. We were in noman’s land, and had no business riding the tracks we were two up and a heavily loaded xCountry. 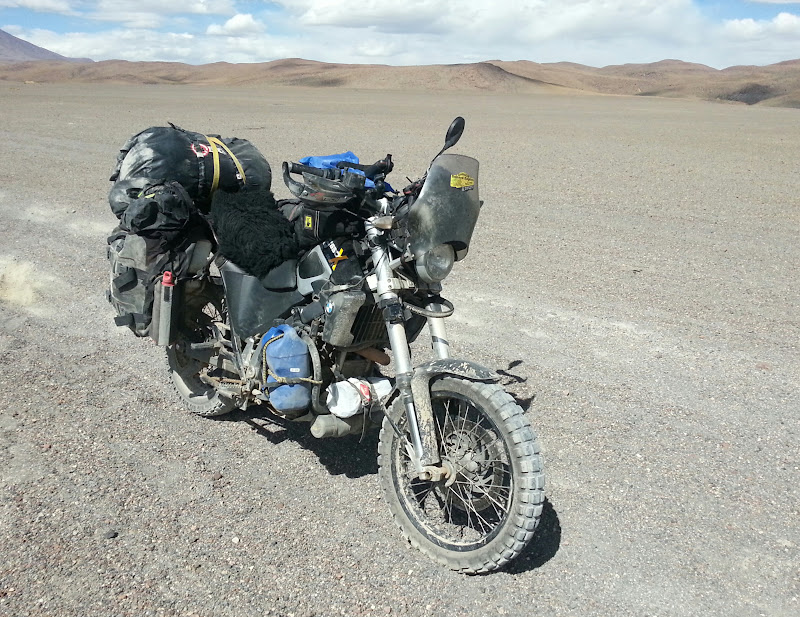 Approaching 5pm it dawned on us that we’d probably be wild camping. Sunset was at 8pm and we wanted to find a good spot well before then. We turned around, the bike got stuck again, and started to track back 5 miles, where we’d previously seen some shelter. 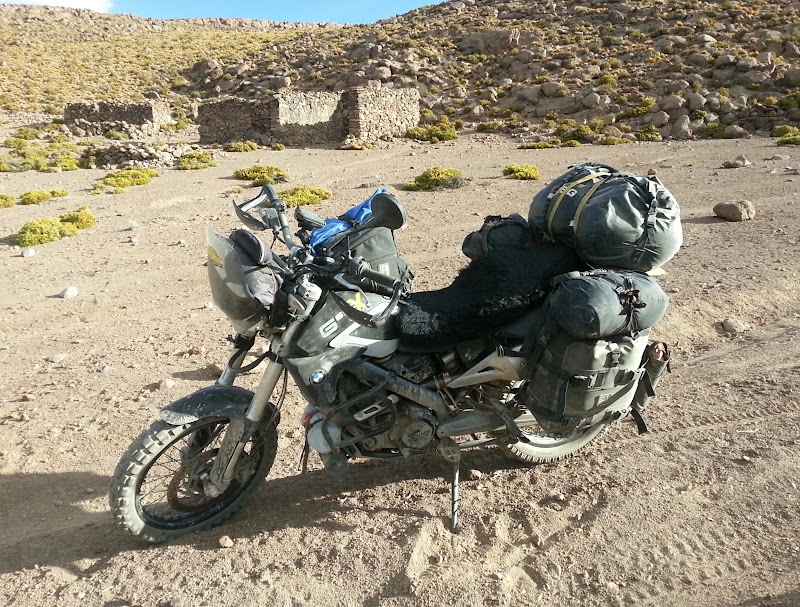 We had expected to be in Ollague by 3pm, we were well past that now, and Sam had eaten all her cereal bars, a banana, and my pastry. I’d drank most of my water, and Sam hadn’t even packed any (apparently she doesn’t like the taste from her hydration pack).

Luckily many years before, someone had built a shelter for us. Or perhaps it was just an abandoned building. Either way it had four walls, and an entrance. No roof, but it would provide great shelter for our tent. We immediately set about pitching the tent, but having surfed the day before, and over exhorting ourselves lifting the bike, we didn’t quite have the energy we were accustomed too. Especially now at 4,000m.

With roughly 600ml of water left in my hydration pack, I argued that we should go without noodles, and save the water the drinking, but Sam was hungry, and insisted we cook two packs of noodles, using 400ml of water. After all we’d get water from the food anyway.

She carefully set up the stove and went about cooking. A moments lapse of concentration and the next thing we knew, the pot was on the floor. We’d lost some precious water, and had to add more to the dish. Now there was nothing more than a few sips left.

After dinner, Sam read, while I tried to sleep. The sun had begun to set now and the temperature started to fall. I was wrapped up in merino wool gear, and my duck down sleeping bag, but something was wrong. No matter what I did I just could get warm. A short while later I began to feel sick, and sure enough up came the noodles. An hour later and I was sick again, this time there was nothing to throw up. Not even water. Altitude sickness? Or a dodgy meat empanada? Either way, we were stuck on the mountain until morning.

I actually felt much better after the second vomiting episode, and eventually warmed up and drifted off to sleep. It must have been a cold night was our sheepskin seat cover was frozen in the morning, though we stayed warm in the tent.

We despite being thirsty as hell, we didn’t get up with sunrise, but instead slept in until 8a.m. We’d made the decision to skip Ollague and to head all the way back to the main road, and Iquique. But now, in addition to the thirst, and the hot morning sun, we had another problem. Fuel. The fuel warning light comes on at two litres left. It had already been on before we setup camp, and we had over 30 miles to go to make it to the road.

We packed up, and set off slowly. I was feeling much better, and even managed to scoff down a ‘dry’ cereal bar. Taking it easy, we had no problems, or moments on the return route.

Having reached the scene of our first accident the day the before, we realised that we should/could have taken a left turn onto the ‘main’ road to get to Ollague. That’s why the sat nav added 6 miles to our route. Now we were faced a decision. Continue tracking back to the asphalt and head to Iquique, or take the ‘main road’ to Ollague.

The first would see us run out of fuel long before we ever go to Iquique, but there would be passers by and they’d have precious water. The second would see us make it to Ollague, with enough fuel, and leave us to go about our business from there. The only problem being, it was still another 20 miles on piss poor dirt road, probably no sand though.

It only took a moment. We decided to go back to the safety of asphalt. An hour, or so later, and  36 miles into our two litre reserve, we made it to the road. There was a Carabineros station opposite. I marched in and asked for some water. A young officer duly obliged and handed me a two litre bottle of chilled aqua sin gas. Damn it tasted good. 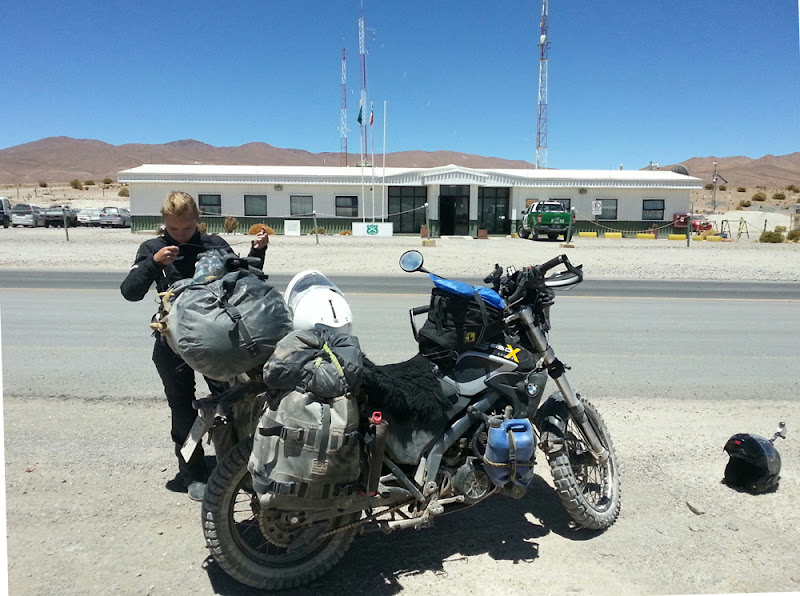 I explained our situation, and although the Carabineros couldn’t offer us any fuel, they did note that there was a fuel station just a little closer than the 100 plus miles to Pozo Almonte.

Our reserve lasted another two miles, before I poured in the contents of the Primus bottles, and the now less than three litres (thanks to the crashes) that was left in the Chinese container. Slow and steady was the order of the day.

The road back rose and fell, rose and fell, and the wind was against us. A bad combination for fuel economy. The bike sat between 50-60mph for the most part, as I watched the miles tick up on the fuel gauge (on the xCountry there’s a third ‘fuel’ trip meter once the reserve light comes on).

We reached a small car park at the side of the road, where I asked one of the pick up drivers if he had any gas. Of course his vehicle, like all the others we passed was diesel. So onwards we rode wondering just when we’d run out. When we came to a turn off for the small town the Carabineros had mentioned, fuel was only 30 miles away. We had enough to make it. Only, the route to the town was unpaved.

I steered the bike onto the track and instantly regretted the speed at which I’d approached. Again the track was deeply rutted, worse than anything we’d come across in Bolivia. Sam would rather us continue on the asphalt, and run of fuel rather than take that road, so that’s exactly what we did (almost).

We crawled along, slowing a little more as litre burned away. We were doing 45mph when the fuel gauge rolled based 30 miles on reserve, and we were just 8 miles from Pozo Almonte. I desperately look around for places that might have fuel, but again, it was all diesel. Then Up ahead I spotted on old early 90s Toyota Corolla. ‘That take petrol’ I shouted to Sam, and turn off the road, towards the hut where the vehicle was parked.

There was a little girl in the yard, but apparently no parents were home. Her mother then emerged form a side street, and I explained that we needed a litre or two of fuel. She was happy to help, enthusiastic even, and popped open the url cap of the Toyota, and provided a hose to syphon petrol. Our efforts were in vain though, neither of us could get fuel out of the old thing.

She called her husband who was working nearby, and 20 minutes later he appeared, but alas failed to get a syphon from the car. Instead he drove back to work, and returned a few minutes later with two litres of fuel.

I gave my thanks and tried to give him $10.000 peso for the trouble, but he wouldn’t have any of it. So with that we rode off to Pozo Almonte, fuelled up, and headed back to Iquique to rest for a few days, and recalculate our route. We were both tired and hungry, but no worse for wear despite our ordeal. The bike needed cleaning, and few bolts tightening, but it too was fine, with some minor damage.